Home » Blog » Art » On the life and death of buildings, and the moments in betweeen….

Buildings can live long and varied lives, and as network researcher Jane Jacobs has written (with Stephen Cairns), ‘buildings must die’. But what of the moments between their creation and their demise? Given that urban environments, and the buildings within them, are constantly in flux, how can we identify the significant moments within a building’s existence? How can we learn to pay attention to the various points along the continuum of change that characterises the life of a building? …

In Melbourne, an art exhibition is both freezing a building’s life for one week while also managing to make us think about its past and its imminent demise. This building began life in 1911 as the Lyric Theatre in Fitzroy, a function it fulfilled for many years. Later, it became a shop, and sold furniture and then discounted homewares and beach goods for a range of manufacturers. Derelict for many years, it is about to be demolished so that the site can be ‘developed’ into 158 apartments as part of the further gentrification of Fitzroy.

“Live in the now with a nod to the past, a glamorous life is yours at The Lyric. On the site of one of Melbourne’s very first theatres, the Lyric Theatre has been beautifully reimagined as a series of chic apartments impeccably designed by Hayball. Located in the heart of vibrant Fitzroy, and with the CBD within walking distance, The Lyric offers sophisticated inner city living in a class of its own”.

But before demolition and development occurs, for one week only, the building is the site for an extraordinary art show, called by Melbourne artist, . Rone is part of the much-loved street art crew, Everfresh, as well as a successful solo artist. 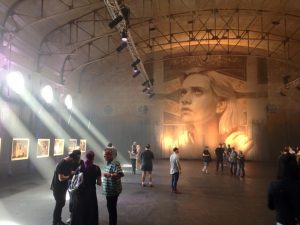 ‘Empty’ draws together the building’s imminent demise as well as its lost history (the exhibition has revealed the original murals that were on the buildings walls) by drawing our attention to the glories of the present moment – the beauty of the light as it slants in to the space, the faces fading into the plaster, the sense of ghosts hiding just out of sight. All buildings must die, but sometimes, if we pause and look, we can glimpse their beauty in the present, vanishing, moment.