Recently, my colleague Simon Lindgren and I were in Amsterdam and found ourselves with a little be free time before our return flight to Sweden. So, we decided to embark on a mission to visit the two separate Banksy exhibitions that are currently showing in the city in less than 2 hours. The first, entitled Banksy: Laugh Now is at MOCO on Museumplein until December 31st 2016 and the second, entitled The Art of Banksy is at Beurs van Berlage until January 8th 2017. Both follow the Banksy: Keep it Real exhibition that was hosted by the city’s Lionel gallery last summer. 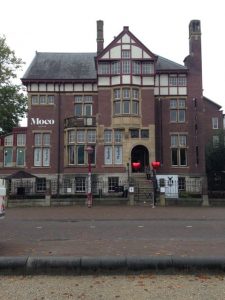 I have to admit I had no idea either of the current exhibitions was on before I got to Amsterdam. Having visited the New York meets The Dam exhibition at the Amsterdam Museum the last time I was in the Dutch capital in January 2016 I should have known better to check ahead and plan flights that might have bought me a little extra time to explore them. As it was I had heard more about the controversies surrounding The Art of Banksy exhibition that opened recently in Melbourne. Like its European namesake that exhibition is curated by Steve Lazarides – Banksy’s former but now estranged business manager. It is not endorsed by the artist and was recently  panned by street art scholar Alison Young in a Conversation piece not only for its poor installation choices but also for taking “the commodification of Banksy one step too far.”

That exhibition’s European identical twin – the Beurs van Berlage  exhibition – represents an equally commercialised and shallow engagement with Banksy’s work, which has been designed, without wanting to sound too much like a snob, for the easy consumption of a touristic mass whose appreciation and knowledge of street art extends only as far as the Bristolian who is now a household name. The exhibition relies primarily on Banksy canvases and prints complimented by photographs and video projections, which if I am honest often feels as if it could have been thrown together by anyone with a half decent printer and access to the Internet . The cavernous feeling of the exhibition space and the token effort to invoke the streets of London through a randomly placed red telephone box and a projected video of people descending the escalators into an Underground station (touted in some online publicity material as a reconstructed Tube Station!) is comical. This was especially the case given the near absence of any of the artist’s street based works (beside those mostly shown in photographs).

The exhibition’s lack of street works might arguably be applauded rather than condemned given the controversy of displaying such works removed from their original context but this decision is unlikely to have been intentional and more likely reflects which Banksy works could pragmatically be displayed. Still, these weaknesses made the task of speeding through the exhibition, given our time restraints, relatively easy. At an entry price of around 20 Euro we probably ended up paying more than a euro a minute for our time there – most of which was actually spent in the gift shop confounded by an orgy of random Banksy merchandising including a shelf full of water cartons featuring the artist’s Girl with a Balloon piece. We just had time to grab a cheaply produced but extortionately priced (30 euro) catalogue as we exited rather rapidly through the gift shop in order to make our flight. 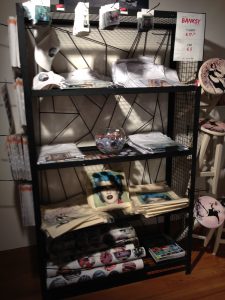 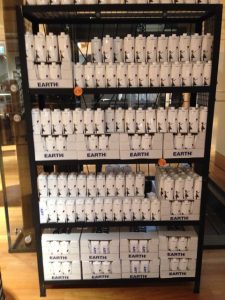 Our brief visit to that exhibition followed a slightly longer stop at the MOCO exhibition, which in retrospective comparison, was better although by no means without critique. The inescapable concerns about displaying street works in museums and galleries arrested much of my attention while I was in the exhibition given that it featured a number of works originally produced on external surfaces such as stone and temporary wooden and metal construction hoardings. Predictably the inclusion of these particular pieces was couched in a rhetoric that emphasised their ‘rescue’ from the common and inevitable processes of urban demolition and destruction, to be preserved for the enjoyment of future audiences. This, now well rehearsed yet widely discredited argument, was also used back in March 2016 by those curating an exhibition in Bologna that applied a similar conservational logic to some of BLU’s works. That exhibition which through its title Street Art – Banksy and Co once again emphasised a single artist over many others, eventually led to BLU carrying out numerous acts of auto-iconoclasm by buffing his own works in the city (for more on this see RJ Rushmore’s blog and the rest of the Internet). Certain pieces in the Moco exhibition like the events in Bologna thus once again brought to the fore the important questions regarding street art’s (and graffiti’s) relationship with mainstream heritage and conversation frameworks that I have been exploring since 2009. 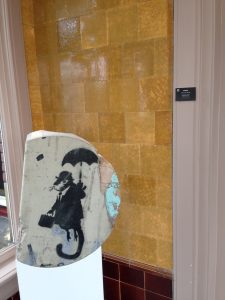 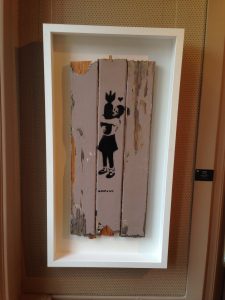 However, the MOCO exhibition was of further interest because it also featured a number of moveable (or at least more movable) artifacts featuring Banksy works such as traffic cones and signs, and most impressively the SWAT van that featured in Banksy’s first US show, Barely Legal, in 2006 and fetched £218,000 at auction in June of this year. These objects represent an additional vector for the museumisation (and not simply gallery-isation – if that is a word) of street art, besides those vectors related to ‘outside’ works taken from walls and other more permanent structures of public space, and the ‘inside’ works purposefully created for indoor display such as canvases, prints and sculptures. In other words they are akin to the black books and personal items of former graffiti artists that featured in the New York meets The Dam exhibition. This movable heritage of street art and graffiti hasn’t yet received the academic attention that it deserves especially given that in their portability these artifacts complicate the dichotomies between outside and inside and street artists’ gallery and street works that currently characterize much academic research on the subject. 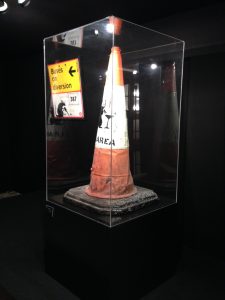 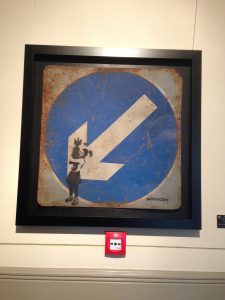 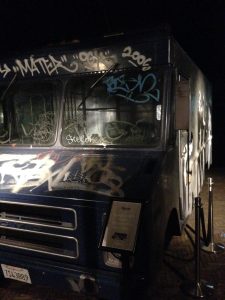 Of further interest is the fact that the merchandising and catalogues associated with street art exhibitions can become, in time, artifacts and collector items themselves with the potential to feature in future exhibitions or museum displays on the subject. I have notice this occurring before, such as in a Berlin Bruce Davidson photography exhibition that I reviewed a few years back, where the various republished editions of the photographer’s Subway series featured as artifacts alongside the contemporary display of some of his photos. This strategy was also employed in The Art of Banksy with one display case including among other items two of the earliest books on Banksy, volume one and two of the  Existencilism series first published in 2002, which some sellers on Amazon now claim are collectables worth around $150.Picking up the exhibition catalogue, no matter how much of a rush you may be in, might not be such a bad idea.

The Banksy: Laugh Now catalogue, although not much better in terms of analytical content than its counterpart from The Art of Banksy is at least of a higher production standard (and a little cheaper – softcover for 25 euro!). It also keeps better company. I don’t mean MOCO’s equally ridiculous collection of Banksy merch but instead the array of Banksy literature for sale in its gift shop, which includes  one of the most academic analyses of a Banksy exhibition, the 2012 volume edited by Urban Environments researcher Paul Gough entitled Banksy: the Bristol Legacy. This is one of the books that anyone doing academic work on Banksy is encouraged by peer-reviewers to cite, which points in its own way to the manner by which Banksy has also often monopolized academic debates about street art and graffiti – partly no doubt because of the artist’s high profile as fueled by the number of popular books dedicated to the artist, which in turn act as a defacto secondary academic literature. I have fallen prey to this in the past and may be doing so again here although at least now when I present research on street art and graffiti I often make a conscious effort to avoid the B word.

Banksy’s current monopolisation of popular street art exhibitions in Amsterdam might have been expected given the city’s status as one of Europe’s mainstream art market capitols. In fact, Simon asked the attendant at The Art of Banksy exhibtion whether it was just coincidence that there were two exhibitions about Banksy on at the same time. Her sighed confirmation that this was the case seemed to suggest that Steve Lazarides and the exhibition’s other organizers had not been aware of, or prepared for, the competition offered by Banksy: Laugh Now. Certainly the latter was far better attended in the brief time we visited and although neither were exactly what I was after I would still recommend that if you find yourself in Amsterdam before the end of the year and need a Banksy hit you choose to go to MOCO over Beurs van Berlage. Better than both of those, grab a ferry over to NSDM, momentarily try to banish thoughts of street art’s complicity with the forces of gentrification and enjoy the array of rapidly changing pieces on display there.

All photos by Sam Merrill.